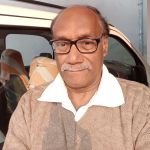 Ram Krishna Singh, born, brought up and educated in Varanasi (Uttar Pradesh, India), has been writing poetry in English for about four decades. He has authored over 160 academic articles, 170 book reviews, and 42 books. His recent collections of poems include I Am No Jesus And OtherSelected Poems, Tanka and Haiku (English/Crimean Tatar, Romania, 2014), You Can’t Scent Me and Other Selected Poems(New Delhi, 2016), God Too Awaits Light(California, 2017) and Growing Within (English/Romanian, Romania, 2017).

His awards and honours include Ritsumeikan University Peace Museum Award, Kyoto, 1999, Certificate of…