(SPOILER ALERT: If you’re one of the handful that still hasn’t seen Star Wars: The Last Jedi, be warned!)

How did it all go so wrong?

I was the hero of the rebellion against the empire. I was the last hope of the Jedi. But when it was time to fulfill that hope, I failed beyond measure.

Some nights, I relive the breathtaking moment when I destroyed the Death Star and saved the alliance. The Force, the very energy of the universe, flowed through me, even as a deep cold pursued me down that trench. The last whisper of my first teacher–Ben Kenobi, the great Obi-wan Kenobi of the Clone Wars–urged me to trust. And that’s what I did, right when I fired the proton torpedos through that exhaust port. The “one shot in a million”

will be with me

Other times, I remember the searing pain of my light-saber cauterized stump. And Darth Vader, telling me the truth that Yoda, my second teacher, and Ben would not. “I am your father.” The words eviscerated me worse than any saber blow. I cried out in despair, as my own feelings confirmed them. And in one last, defiant act, I let myself fall away from my father’s outstretched hand. 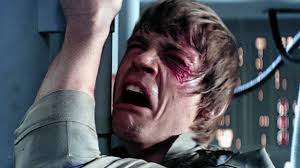 I could have let that terrible truth destroy me. But I didn’t. I grew in the force instead,  learning to control it, and to let it control my actions while it obeyed my commands. I saved my friend Han Solo from Jaba the Hutt, faced the Emperor and Darth Vader, and I turned the dark lord of the sith back into my true father, Anakin Skywalker. He saved my life by turning on his former master. The Emperor was dead, Darth Vader was no more, and the second Death Star exploded like its predecessor. The Galaxy was finally free once more.

I smile at the force ghosts

of the last jedi 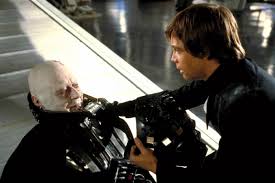 It was supposed to be a new time of peace. A new Republic born. A new Jedi order, to rise from the ashes of the old. But it was not to be.

Han and my sister, Leia, had a son, Ben. Leia entrusted him to me to train in the ways of the force. I taught him and a new generation of Jedi. But I could sense a darkness growing in him. I realized, too late, that a dark force user named Snoke had begun to corrupt him from afar. He would lead a remnant of imperials and become the Supreme Leader of the Empire’s successor, the First Order. In spite of my efforts, Ben continued to turn toward the dark side of the force. Anger, fear, aggression: he pursued the same paths my father had, and that I almost had.

Then came the day. Ben Solo surrendered to the dark side. He became Kylo Ren, turned on me, and killed all of my students. I rose out of the rubble to witness the flames of what once was my new academy. The hope of a new Jedi order had become so much burning debris rising in sparks and smokes.

all my dreams in this

Hero of the rebellion. Savior of the Jedi. Leia and Han–and the Galaxy–had placed their trust in me. And I had failed them all.

alone at a temple

How did it all go so wrong? And why does this girl think she will somehow make it all right? Why does she believe I can help her do this?

But what if she’s right?

So I open myself to the Force for the first time in years. Like a sea breeze at sunset, and the tide rolling to the shore, the presence of life rushes through me. I can feel the pain of so many, like voices crying out in the dark. Especially one. My sister.

My stubborn new “student” will go her way, whatever I say. Like I did when I was her age. I smile at that. I’m sure Yoda would have, too. Not to mention Ben.

It may have all gone wrong. But I do have a chance to make things right. All I need to do is trust, and let the force flow through me. One last time.

becoming one with the force