You came to my home while my husband burned and declared yourselves my master. When I dared to disagree, you flogged me in my own courtyard and raped my daughters.

I ask you, instead: why do you dare to ask?

tears that will not dry a murder of crows

So we rose against you.

Your ninth legion broke before our tides of fury. Your precious Camulodunum, our brother Trinovatians’ stolen home, burned to the ground, and your loyal veterans died on our swords. Not a stone remained of your temple to your Claudius, our oppressor.

We marched on Londinium next, from where your bold governor and his paltry legionaries fled after seeking to make their stand. I hurled the torches that burned the villas filled with your screaming women and crying old men.

We then marched on Verularium and did the same.

plumes of smoke the first bloom from blood-drenched ground

Yes, I came to my end. Somewhere on Watling Street with your back to a forest, your last fighting legions finally defeated me. But remember what I told my Iceni and our Trinovatian brothers before the battle:

“‘But now, it is not as a woman descended from noble ancestry, but as one of the people that I am avenging lost freedom, my scourged body, the outraged chastity of my daughters. Roman lust has gone so far that not our very persons, nor even age or virginity, are left unpolluted. But heaven is on the side of a righteous vengeance; a legion which dared to fight has perished; the rest are hiding themselves in their camp, or are thinking anxiously of flight. They will not sustain even the din and the shout of so many thousands, much less our charge and our blows. If you weigh well the strength of the armies, and the causes of the war, you will see that in this battle you must conquer or die. This is a woman’s resolve; as for men, they may live and be slaves.'”[

I died, not a conqueror, but a free woman. Forever may you, patriarchal Rome, bare the shame that a free woman bowed you nearly to your knees in Britain.

May women everywhere facing the same injustice do the same! 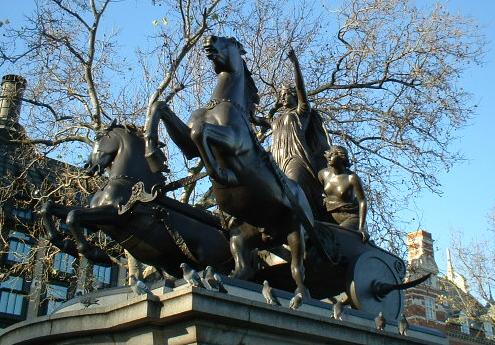 for Real Toads’ April Six: Speaking in the Voice of Another

Boudica fascinates me. A British Celt, she nearly defeated the Roman Empire in Britain. A woman, she dared oppose the most powerful patriarchal hegemony of the Ancient World. I could not resist writing in her voice. I only hope I do her justice.