Photo by rawpixel.com on Pexels.com

It’s hard to believe, but we’re reached the anniversary of the first Halloween #Haikai Challenge That spooky season is upon us again as we’ve reached October’s ultimate weekend. For all of the fright and fun of the trick-or-treat classic, Halloween has a rich tradition and history:

Halloween or Hallowe’en (a contraction of Hallows’ Evening),[5] also known as Allhalloween,[6] All Hallows’ Eve,[7] or All Saints’ Eve,[8] is a celebration observed in a number of countries on 31 October, the eve of the Western Christian feast of All Hallows’ Day. It begins the three-day observance of Allhallowtide,[9] the time in the liturgical year dedicated to remembering the dead, including saints (hallows), martyrs, and all the faithful departed.[10][11]

It is widely believed that many Halloween traditions originated from ancient Celtic harvest festivals, particularly the Gaelic festival Samhain; that such festivals may have had pagan roots; and that Samhain itself was Christianized as Halloween by the early Church.[12][13][14][15][16] Some believe, however, that Halloween began solely as a Christian holiday, separate from ancient festivals like Samhain.[17][18][19][20]

Halloween activities include trick-or-treating (or the related guising), attending Halloween costume parties, carving pumpkins into jack-o’-lanterns, lighting bonfires, apple bobbing, divination games, playing pranks, visiting haunted attractions, telling scary stories, and watching horror films. In many parts of the world, the Christian religious observances of All Hallows’ Eve, including attending church services and lighting candles on the graves of the dead, remain popular,[21][22][23] although elsewhere it is a more commercial and secular celebration.[24][25][26] Some Christians historically abstained from meat on All Hallows’ Eve, a tradition reflected in the eating of certain vegetarian foods on this vigil day, including apples, potato pancakes, and soul cakes.[27][28][29][30] 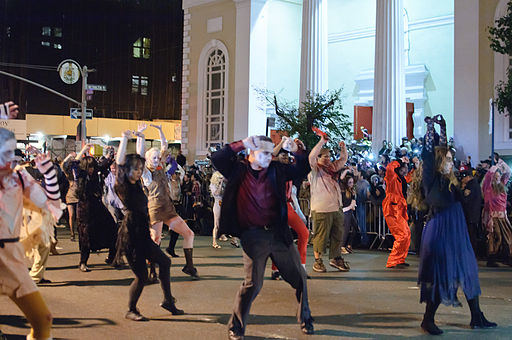 As mentioned above, October 31-November 1 also marks the ancient festival of Samhein:

Samhain (/ˈsɑːwɪn, ˈsaʊɪn/; Irish: [ˈsˠəuɪnʲ]) is a Gaelic festival marking the end of the harvest season and the beginning of winter or the “darker half” of the year. Traditionally, it is celebrated from 31 October to 1 November, as the Celtic day began and ended at sunset. This is about halfway between the autumn equinox and the winter solstice. It is one of the four Gaelic seasonal festivals, along with Imbolc, Bealtaine and Lughnasadh. Historically, it was widely observed throughout Ireland, Scotland and the Isle of Man. Similar festivals are held at the same time of year in other Celtic lands; for example the Brythonic Calan Gaeaf (in Wales), Kalan Gwav (in Cornwall), and Kalan Goañv (in Brittany), both Celtic branches are roughly as old as each other.

Samhain is believed to have Celtic pagan origins and there is evidence it has been an important date since ancient times. Some Neolithic passage tombs in Ireland are aligned with the sunrise around the time of Samhain. It is mentioned in some of the earliest Irish literature and many important events in Irish mythology happen or begin on Samhain. It was the time when cattle were brought back down from the summer pastures and when livestock were slaughtered for the winter. As at Bealtaine, special bonfires were lit. These were deemed to have protective and cleansing powers and there were rituals involving them.[1] Like Bealtaine, Samhain was seen as a liminal time, when the boundary between this world and the Otherworld could more easily be crossed. This meant the Aos Sí, the ‘spirits’ or ‘fairies’, could more easily come into our world. Most scholars see the Aos Sí as remnants of the pagan gods and nature spirits. At Samhain, it was believed that the Aos Sí needed to be propitiated to ensure that the people and their livestock survived the winter. Offerings of food and drink were left outside for them. The souls of the dead were also thought to revisit their homes seeking hospitality. Feasts were had, at which the souls of dead kin were beckoned to attend and a place set at the table for them. Mumming and guising were part of the festival, and involved people going door-to-door in costume (or in disguise), often reciting verses in exchange for food. The costumes may have been a way of imitating, and disguising oneself from, the Aos Sí. Divination rituals and games were also a big part of the festival and often involved nuts and apples. In the late 19th century, Sir John Rhys and Sir James Frazer suggested that it was the “Celtic New Year”, and this view has been repeated by some other scholars.[2]

This week, you have a choice of Halloween or Samhein (or both!) as your unconventional kigo of the week. Write the haikai poem of your choice (haiku, senryu, haibun, tanka, haiga, renga, etc.) that alludes to either (or both).