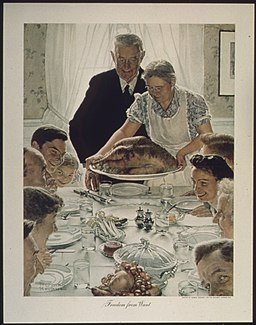 Thank you for your acknowledgement of the Centennary Armistice Day, and for honoring our Veterans, haijin!

Two days after the midpoint of November, and the New York Metropolitan area has its first snow. Errant predictions and consequential unpreparedness left Thursday evening commuters enduring multiple-hour delays. It took me five hours to make the 37 mile (60 KM) trip home, and I was one of the lucky ones!

Nevertheless, I made it home safely, and in good spirits. We were all grateful that my ordeal ended on the up. How fitting, since this week the United States celebrates Thanksgiving Day:

Thanksgiving is a national holiday in the United States, celebrated on the fourth Thursday of November.[1] It originated as a harvest festival. Thanksgiving has been celebrated nationally on and off since 1789, with a proclamation by George Washington after a request by Congress.[2] Thomas Jefferson chose not to observe the holiday, and its celebration was intermittent until the presidency of Abraham Lincoln, when Thanksgiving became a federal holiday in 1863, during the American Civil War. Lincoln proclaimed a national day of “Thanksgiving and Praise to our beneficent Father who dwelleth in the Heavens,” to be celebrated on the fourth Thursday in November.[3][4] Together with Christmas and the New Year, Thanksgiving is a part of the broader fall/winter holiday season in the U.S.

The event that Americans commonly call the “First Thanksgiving” was celebrated by the Pilgrims after their first harvest in the New World in October 1621.[5] This feast lasted three days, and—as accounted by attendee Edward Winslow[6]—it was attended by 90 Native Americans and 53 Pilgrims.[7] The New England colonists were accustomed to regularly celebrating “thanksgivings”—days of prayer thanking God for blessings such as military victory or the end of a drought.[8]

I have so much to be grateful for, but I often don’t acknowledge it. I know I’m not the only one. Thanksgiving is a day for all of us to recognize and express gratitude for what we have.

Thank you, haijin! And for those of you celebrating this coming Thursday, Happy Thanksgiving!